Celebrate Archives Month by exploring the history behind the Central Piedmont Archives, learning basic archival skills, and contributing to projects as a virtual volunteer.

The History Behind the Central Piedmont Archives

The Central Piedmont Archives originally began as the "History Room" in the Hagemeyer Learning Resources Center, where the Parr Center stands today.

In the early 1970s, Dr. Richard Hagemeyer, the first president of the College, asked Raymond V. (R.V.) Mason to work on the history of Central Piedmont. This led Mr. Mason to become the College’s first historian. Before becoming a historian, however, he worked as a Vehicle Maintenance and Auto Body Repair instructor at the Central Industrial Education Center (CIEC), which operated from the Central High School building between 1961 and 1963.

When the CIEC and Mecklenburg College merged to form Central Piedmont Community College in July 1963, he continued working as an automotive instructor. He also became Chairman of the Faculty Senate in 1969-1970, served as President of the North Carolina Association of Educators, and took part in early conversations when it came to selecting a name for the College.

"Several of us got together and talked about the new name," he said. "We decided that the name Central should be kept because so many students, now influential citizens in the community, had attended old Central High School, and their support was needed. The word Piedmont was important because we are located in the Piedmont Crescent. The legislature in Raleigh gave us the term community college. We combined all the ideas and came up with Central Piedmont Community College. I don’t know whether we had any influence on the powers that be, but that was the name they chose."

When he retired in 1974, he switched gears and volunteered as the College's historian. He sought to preserve our institutional history by collecting and compiling a variety of materials, such as newspaper clippings, photographs, scrapbooks, publications, audio recordings, video interviews, and other records. 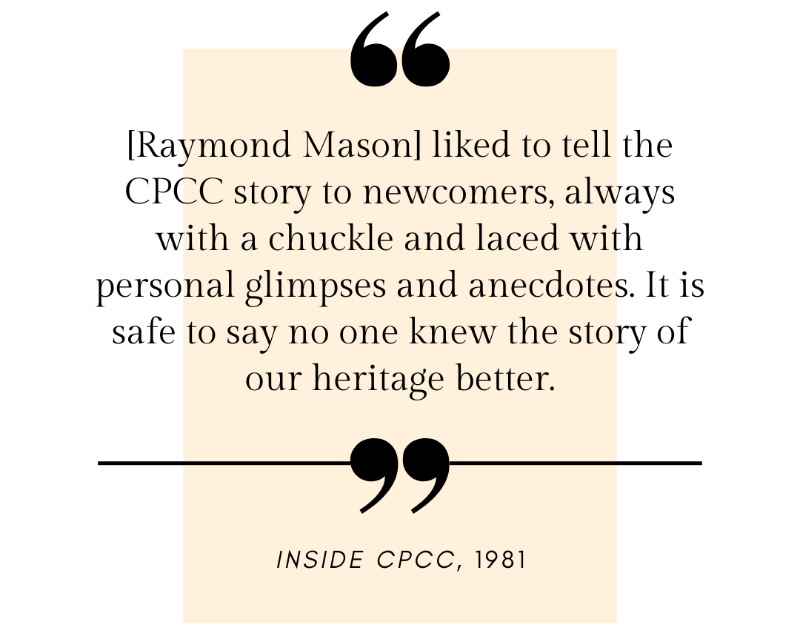 Central Piedmont's Board of Trustees recognized his love and dedication to the College and renamed the auto body lab in his honor on May 23, 1972. It became known as the Mason Building.

Mr. Mason passed away in 1981 and the History Room closed down 5 years later, but his legacy continues today through the Central Piedmont Archives.

In 1986, a former Central Piedmont nursing instructor by the name of Dot Glover donated money to the CPCC Foundation with the purpose of hiring a trained consultant to assess the historical records initially gathered by Mr. Mason and preserve the College’s history. (Read more about this generous donation in the February 24, 1986, issue of Inside CPCC.)

Several years later, Carol Timblin was selected by a committee to write a book about Central Piedmont’s history using Mr. Mason’s collection and other historical records. She also continued what Mr. Mason started by conducting oral history interviews and documenting the first 30 years of Central Piedmont's history. The book, CPCC: The First 30 Years, was published in 1995.

Today, the Central Piedmont Archives is located in the Parr Center and contains a Reading Room — where Mr. Mason’s portrait as well as other artifacts from the College’s history reside — a processing room, and a storage room that houses the College’s vast collections. 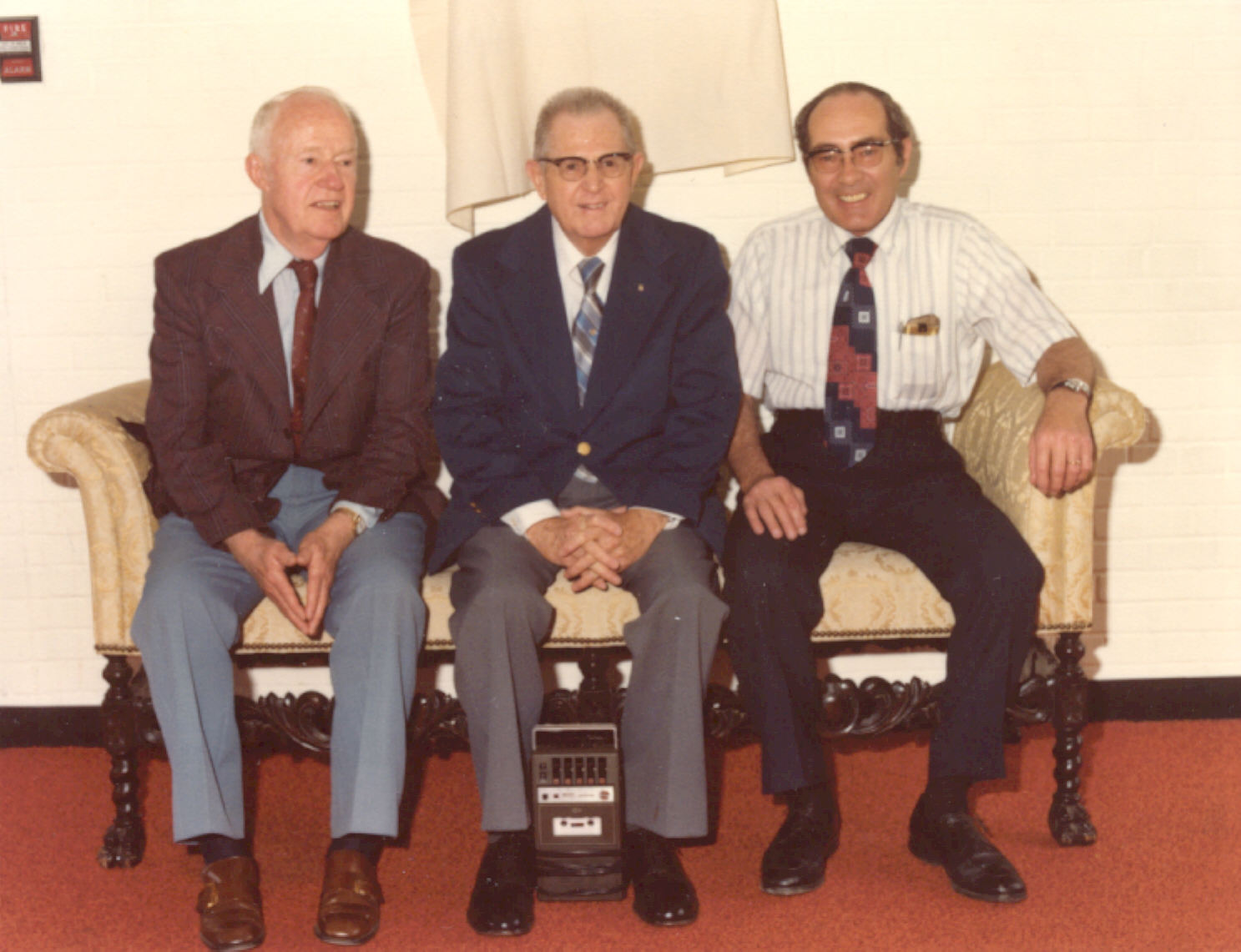 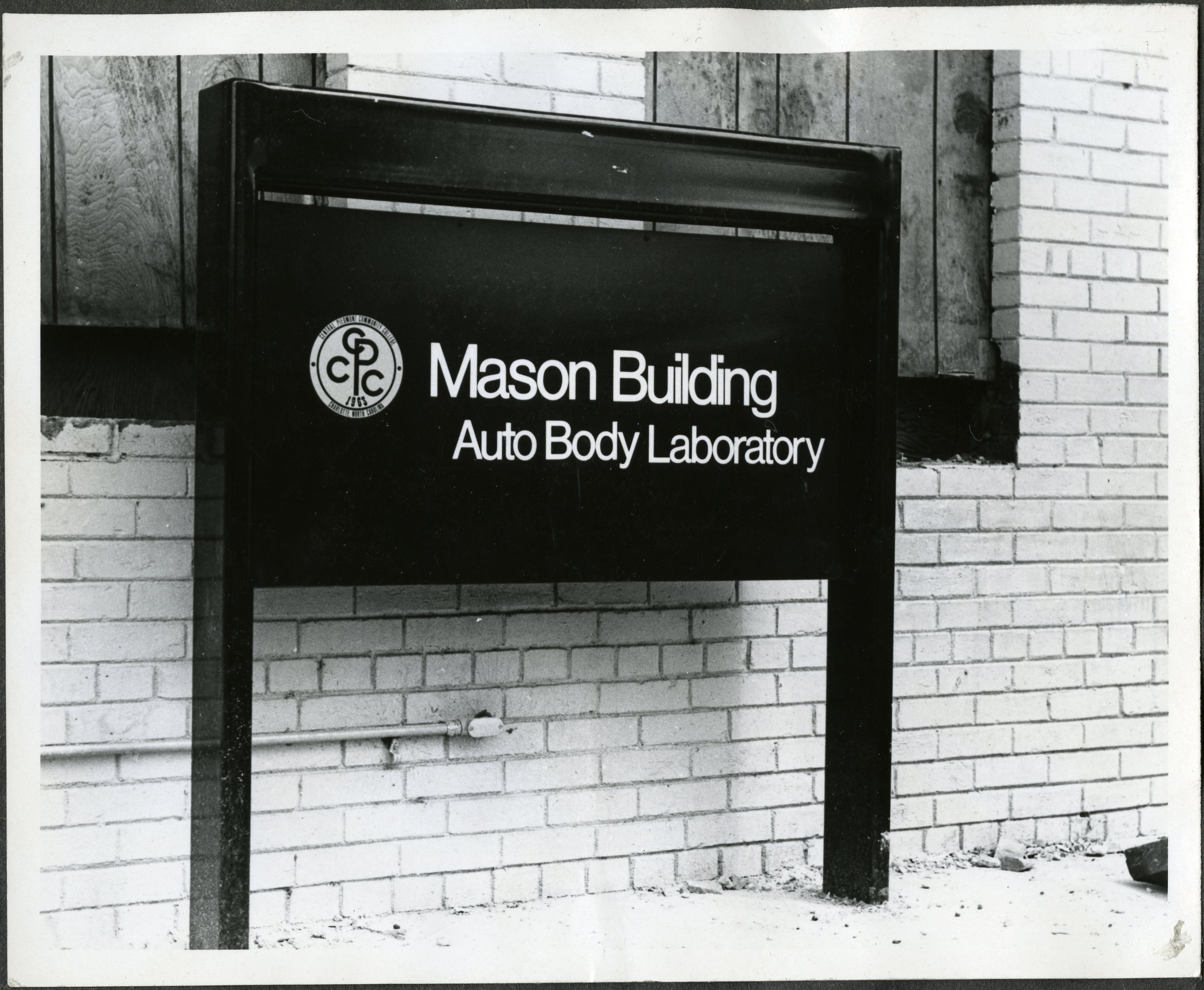 The Auto Body Laboratory. It was renamed after Mr. Mason in 1972. (Source: AR.0036 - Photographs and Negatives Collection) 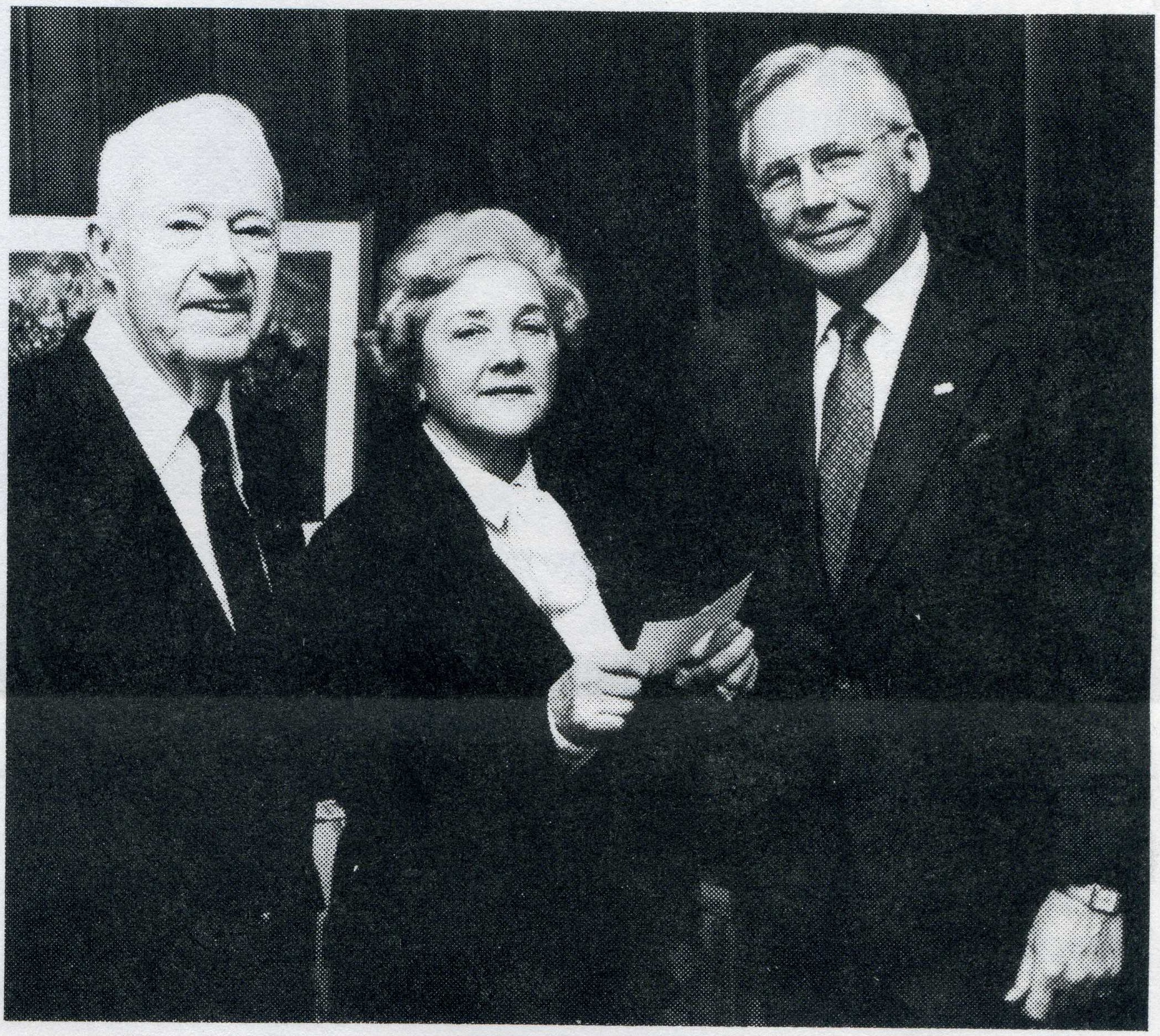 Dot Glover (center) with Powell Majors (left) and Richard Hagemeyer (right) in a 1986 issue of Inside CPCC. Find this issue and other publications in our digital collections. (Source: Inside CPCC, AR.0035 - College Publications College) 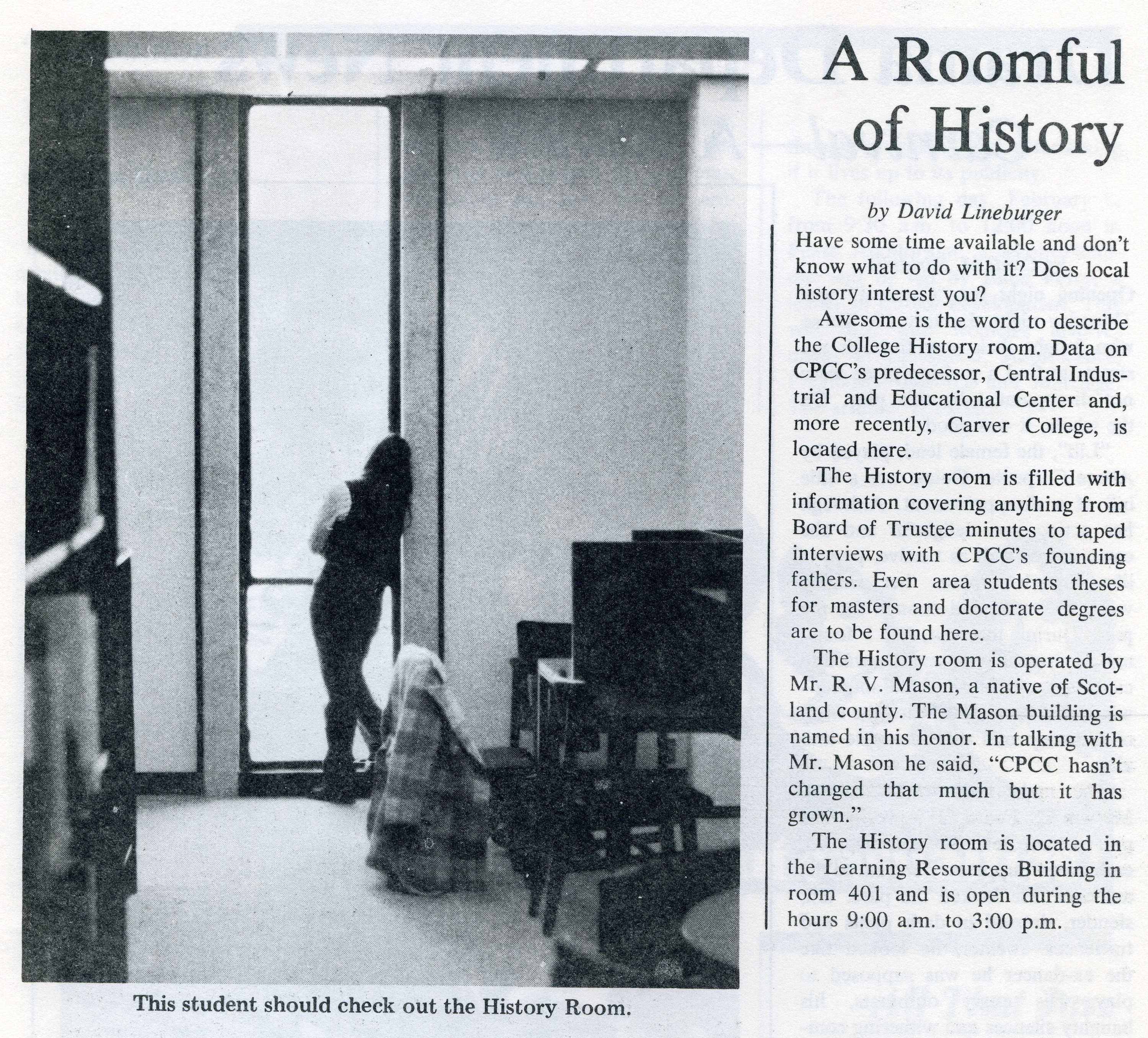 A brief write-up about the History Room in a 1980 issue of The Spark. Find this issue and other publications in our digital collections. (Source: The Spark, AR.0035 - College Publications College) 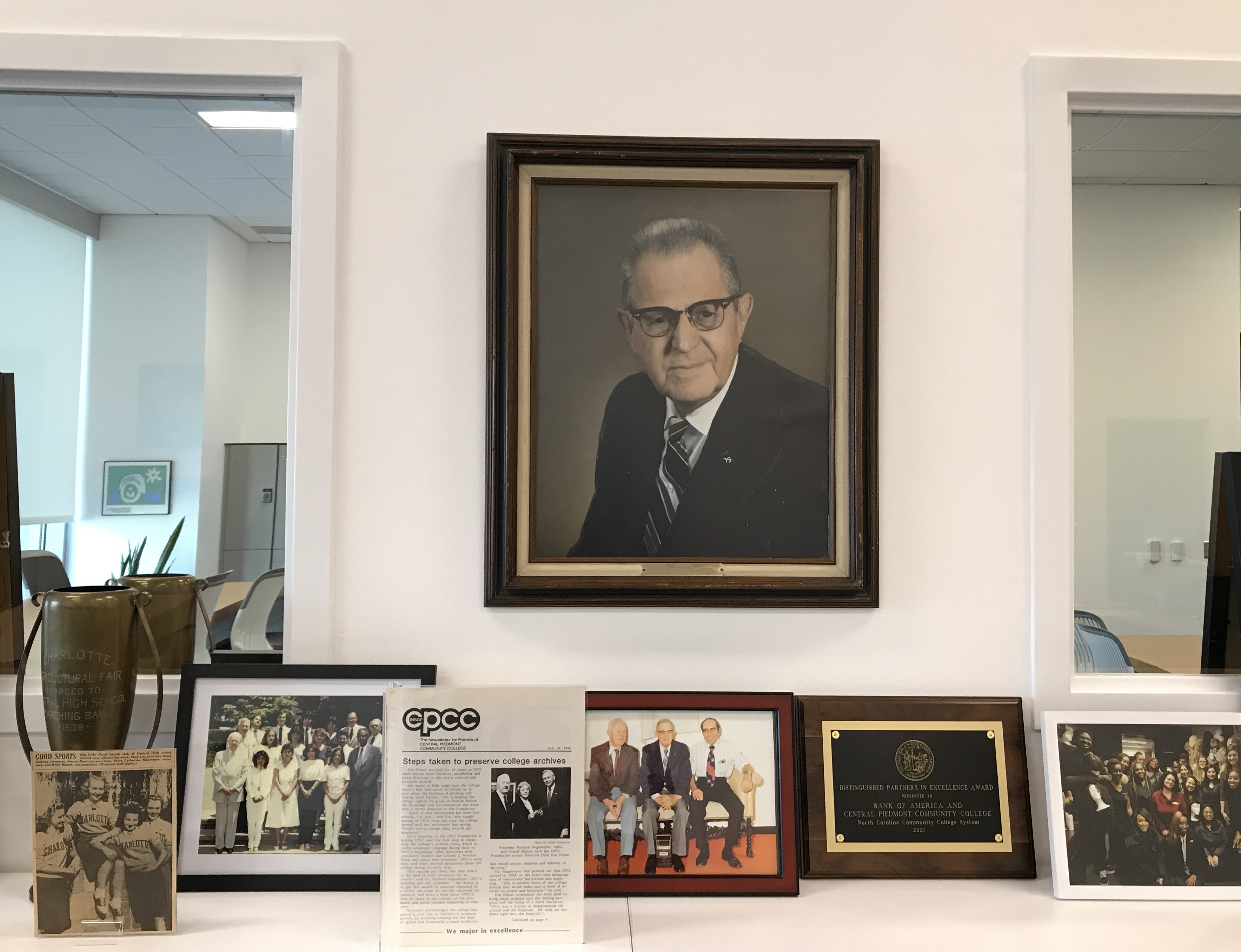