A pictorial digital display of Central Piedmont History for New Employee's to Central Piedmont. This connects to the in-person display featured in Hall 304, Central Campus. 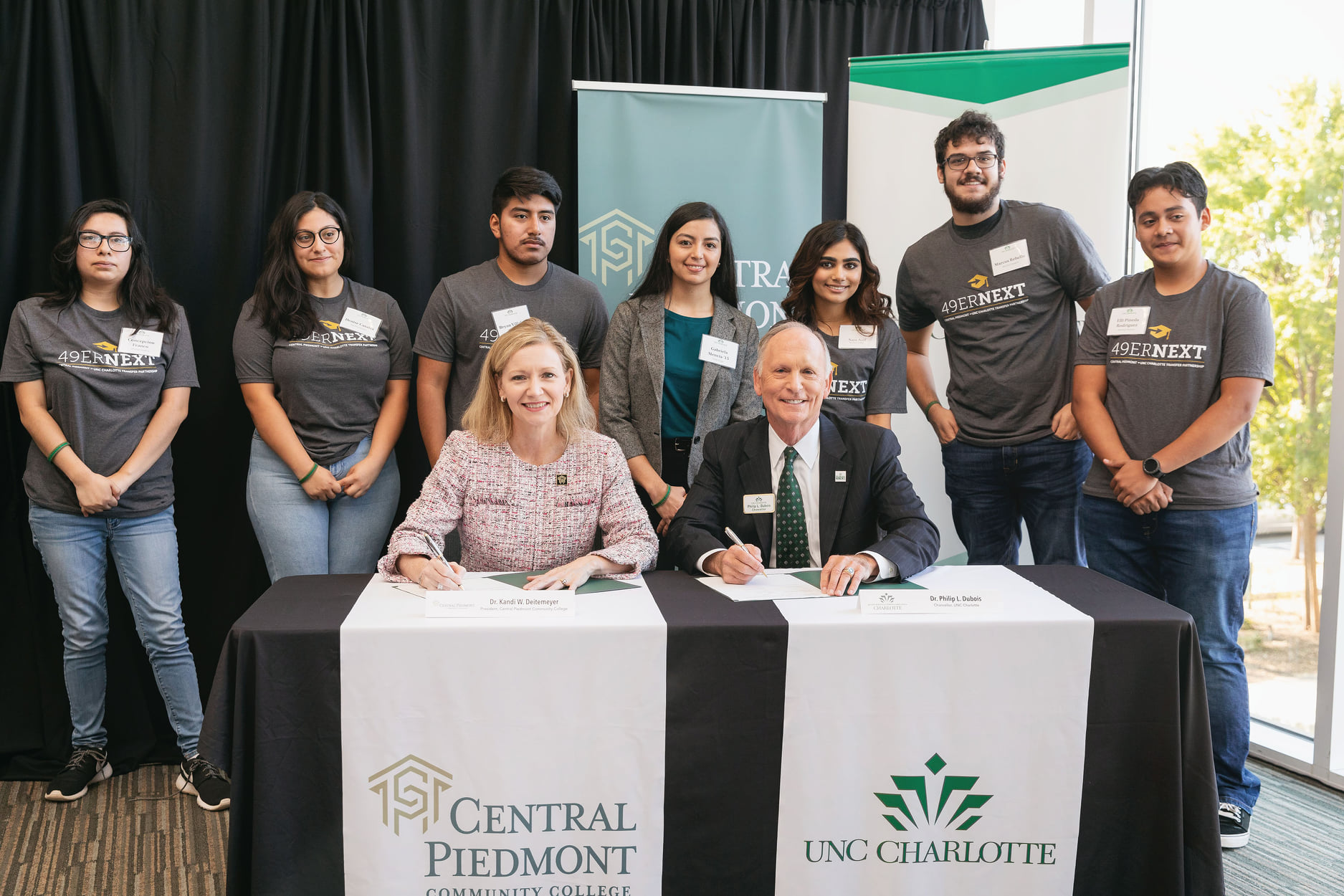 This image shows Dr. Kandi Deitemeyer, president of Central Piedmont Community College, and former UNC Charlotte chancellor Philip L. Dubois with students from Central Piedmont and UNCC. In early 2019, Central Piedmont established the 49er Next program, a partnership with UNC Charlotte. 49er Next allows high school graduates enrolling at Central Piedmont to declare their intent to transfer to UNC Charlotte after earning their Associates Degree. To ensure they stay on track, 49er Next students will choose from among a limited but carefully structured set of curricular programs so they are ready to move into the university and complete their bachelor’s degree on time. 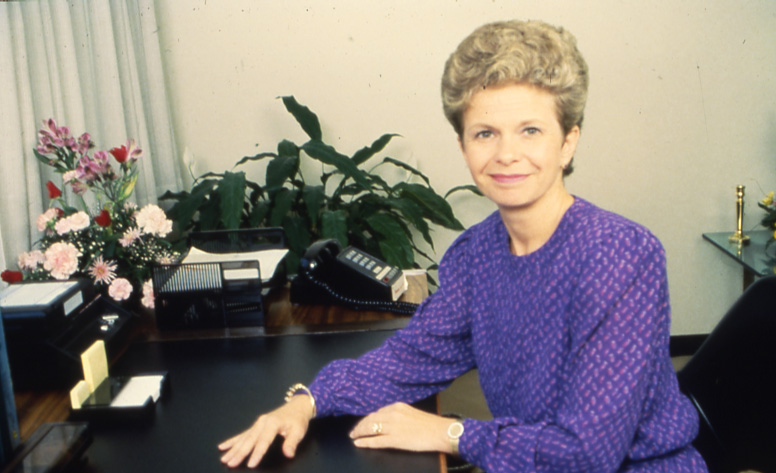 Dr. Ruth G. Shaw, second president of Central Piedmont Community College, in 1986. During  Dr. Shaw's tenure, college trustees authorized the development of comprehensive campuses in other areas of Mecklenburg County to accommodate increasing needs and interests of the burgeoning Charlotte-Mecklenburg community. This phase of development would help make the dream of opening campuses throughout Mecklenburg County a reality during the 1990s and early 2000s. 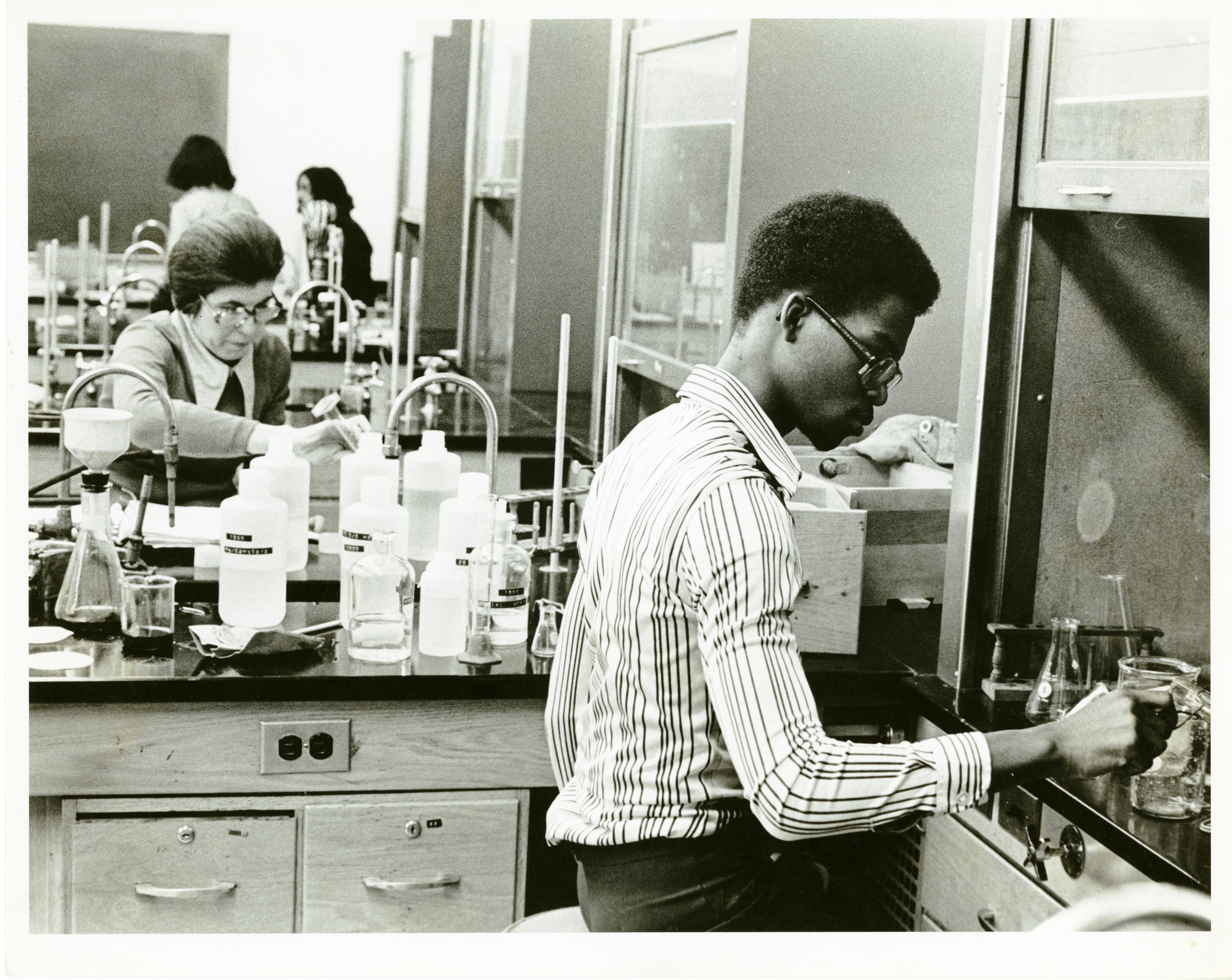 A black and white photograph of students completing lab hours in chemistry class, estimated date of 1979. Central Piedmont offers high-quality, rigorous, and dynamic biology and microbiology, anatomy and physiology, chemistry, geography, geology, physics, and astronomy courses taught by outstanding faculty. Courses in these disciplines may be taken for general education, core, or elective credit and meet the needs and interests of students working towards a degree, diploma, or certificate, those who plan to transfer to four-year institutions, visiting students who wish to transfer credit back to their home institution, and others who are just interested in science. 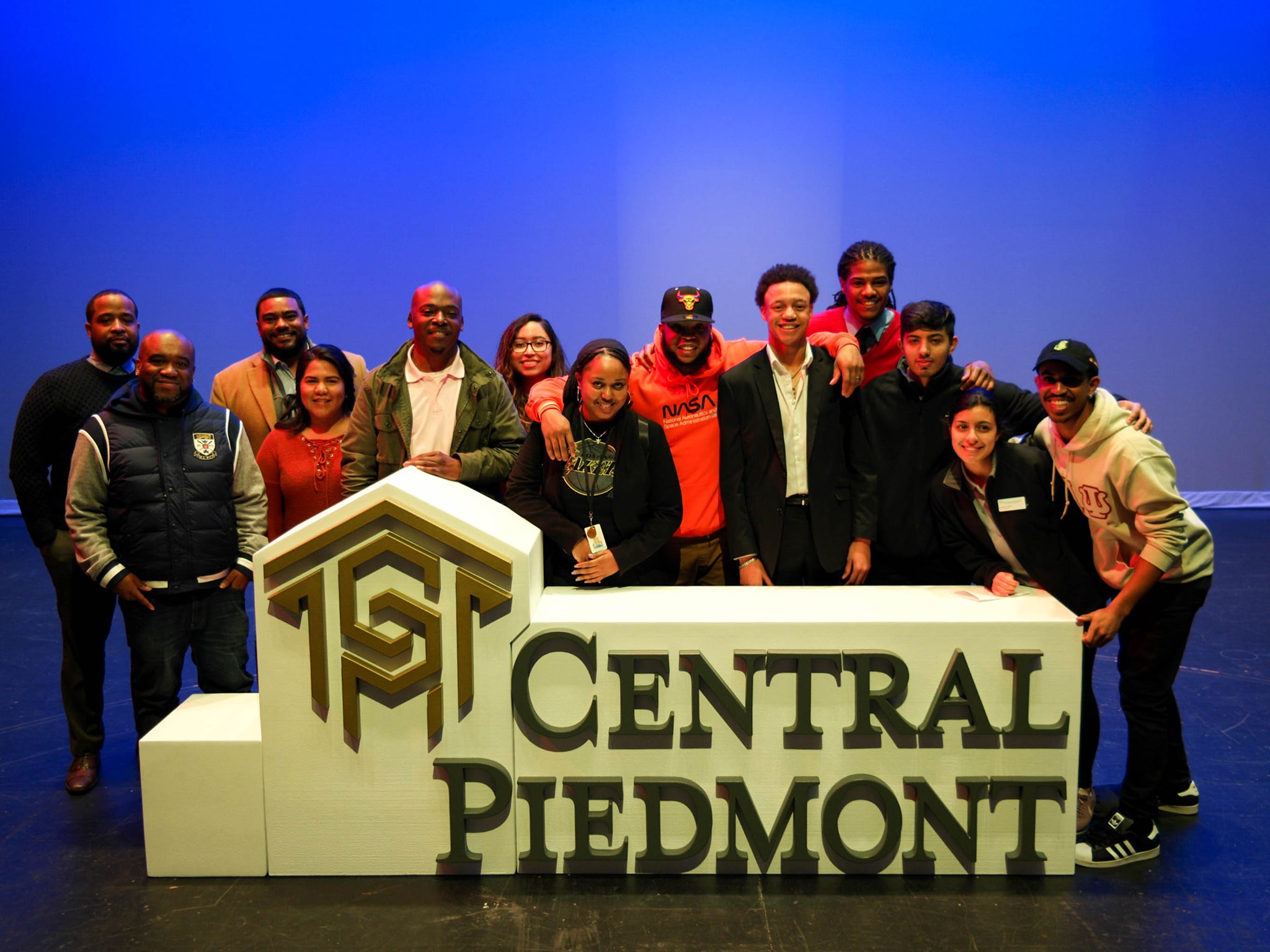 Students photographed next to the new logo for Central Piedmont Community College on April 30, 2019. The college’s “brand” is the emotional and psychological connection people have with Central Piedmont; its personality. The “Central Piedmont green” was replaced with a new color scheme: gold and gray. The old “green box” logo was replaced with a cleaner, more collegiate and modern design. During the logo-design process, multiple student groups expressed their desire for a logo that stands well with other corporate and institutional marks in Charlotte and conveys the seriousness in which Central Piedmont students approach their programs of study and pursue life-changing credentials. 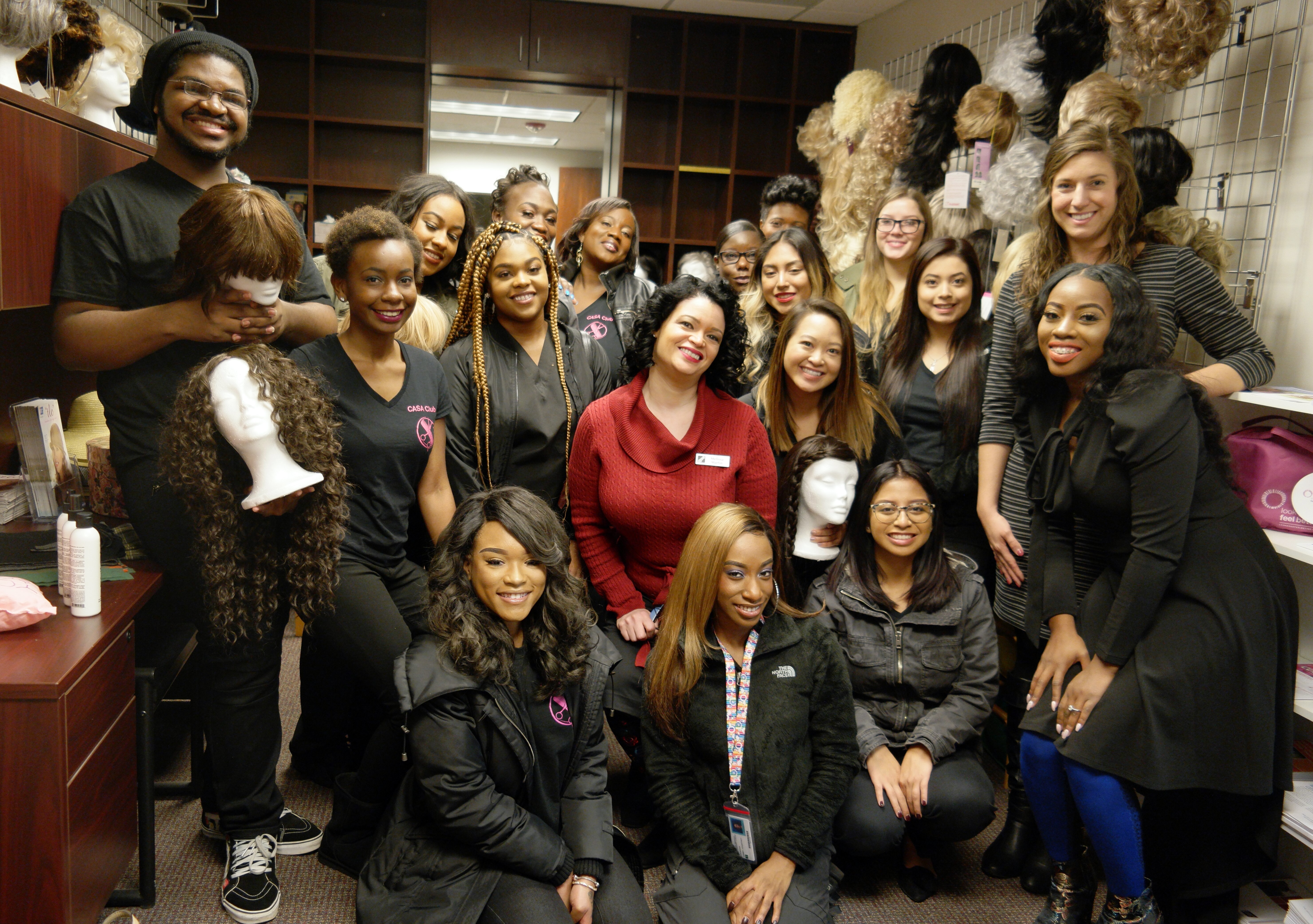 Photograph of Central Piedmont cosmetology students preparing wigs for donation to the American Cancer Society, November 2017. While learning about extensions and wigs, students participated in a service learning project initiated by their instructor, Melissa Martin. She wants students to get into the habit of giving back. The donated wigs come in many different colors and hair textures which provides variety for patients. The American Cancer Society always welcomes wig donations. 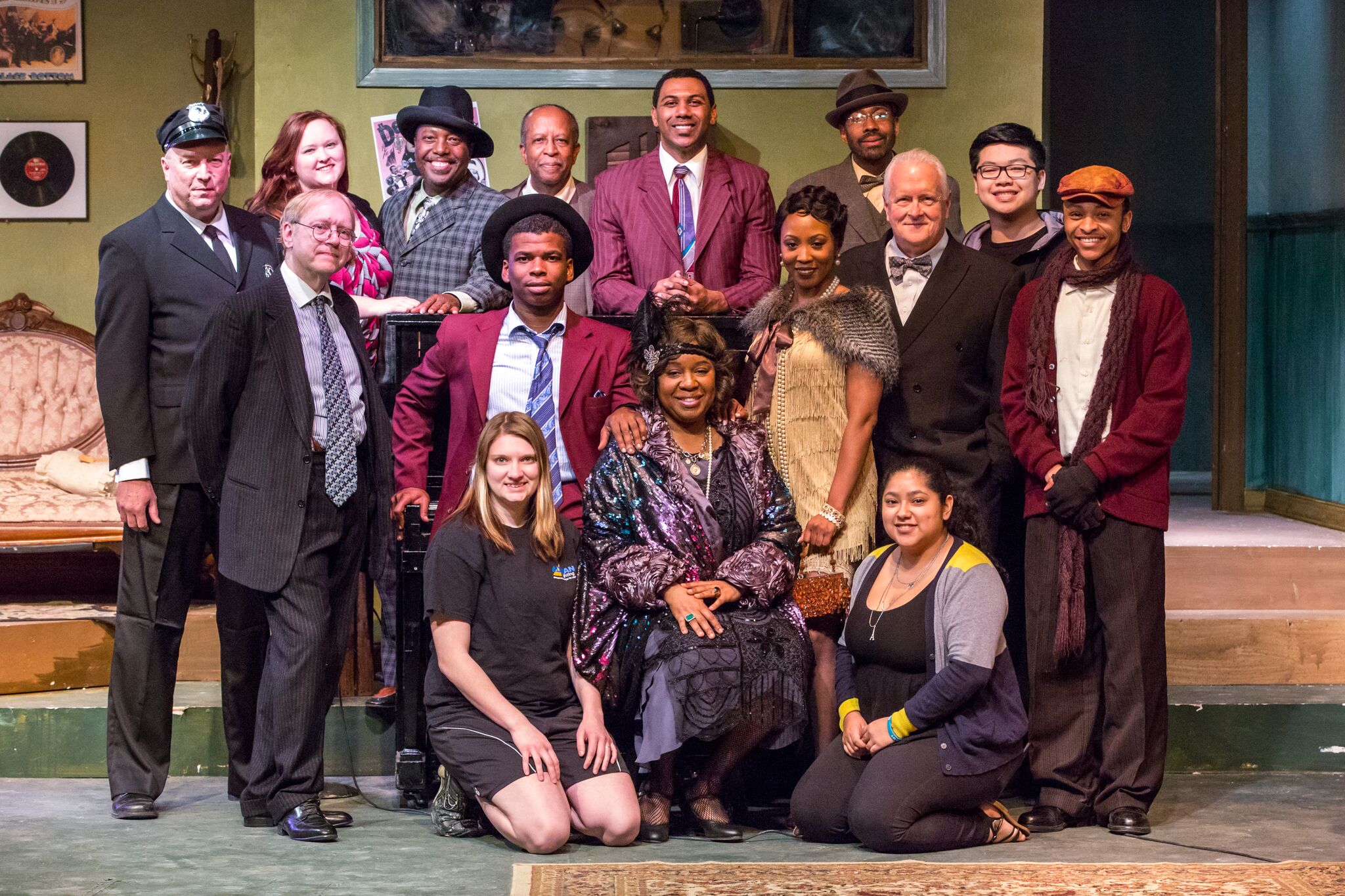 Cast of August Wilson’s “Ma Rainey’s Black Bottom,” performed by students of the Central Piedmont drama program. The drama and theater courses are part of the Associate in Fine Arts (A. F. A.) degree.  The program prepares you to audition for admission into a four year institution and for work in the theatre job market. You will take courses at the freshman and sophomore level in the field of theatre. You will study performance on stage and before the camera and develop skills for behind the scenes. 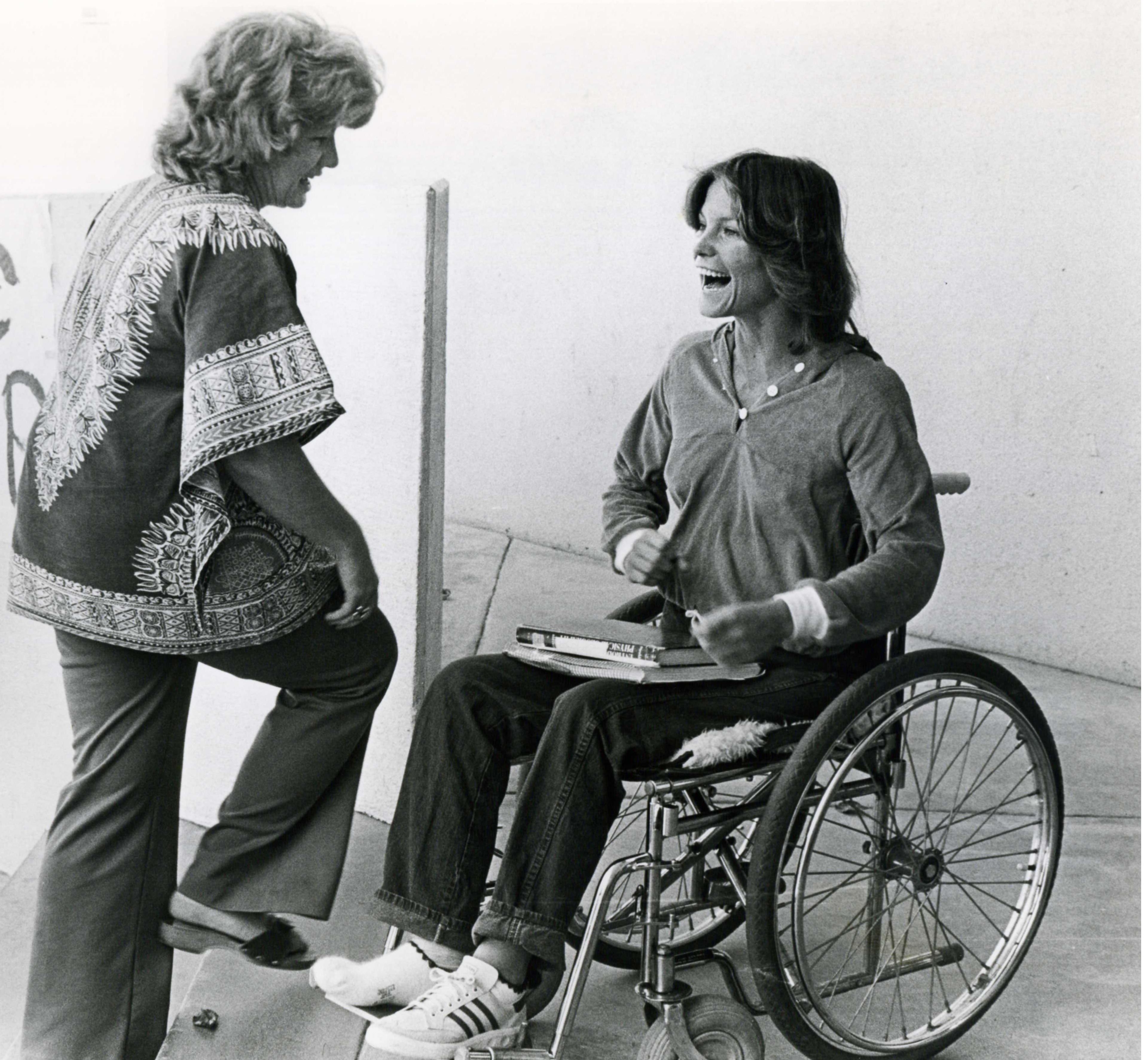 Photograph of Central Piedmont alumnus Donna Conner speaking with a friend on Central campus in 1977. Donna was named the top female athlete at the third annual Carolina Wheelchair Olympics and went on to compete at the National Wheelchair Competition in San Jose, California. Because of Disability and Access Services at Central Piedmont students with disabilities gain equal access to education. We provide academic accommodations, self-advocacy, and support to help enhance our students’ educational experience and personal growth. 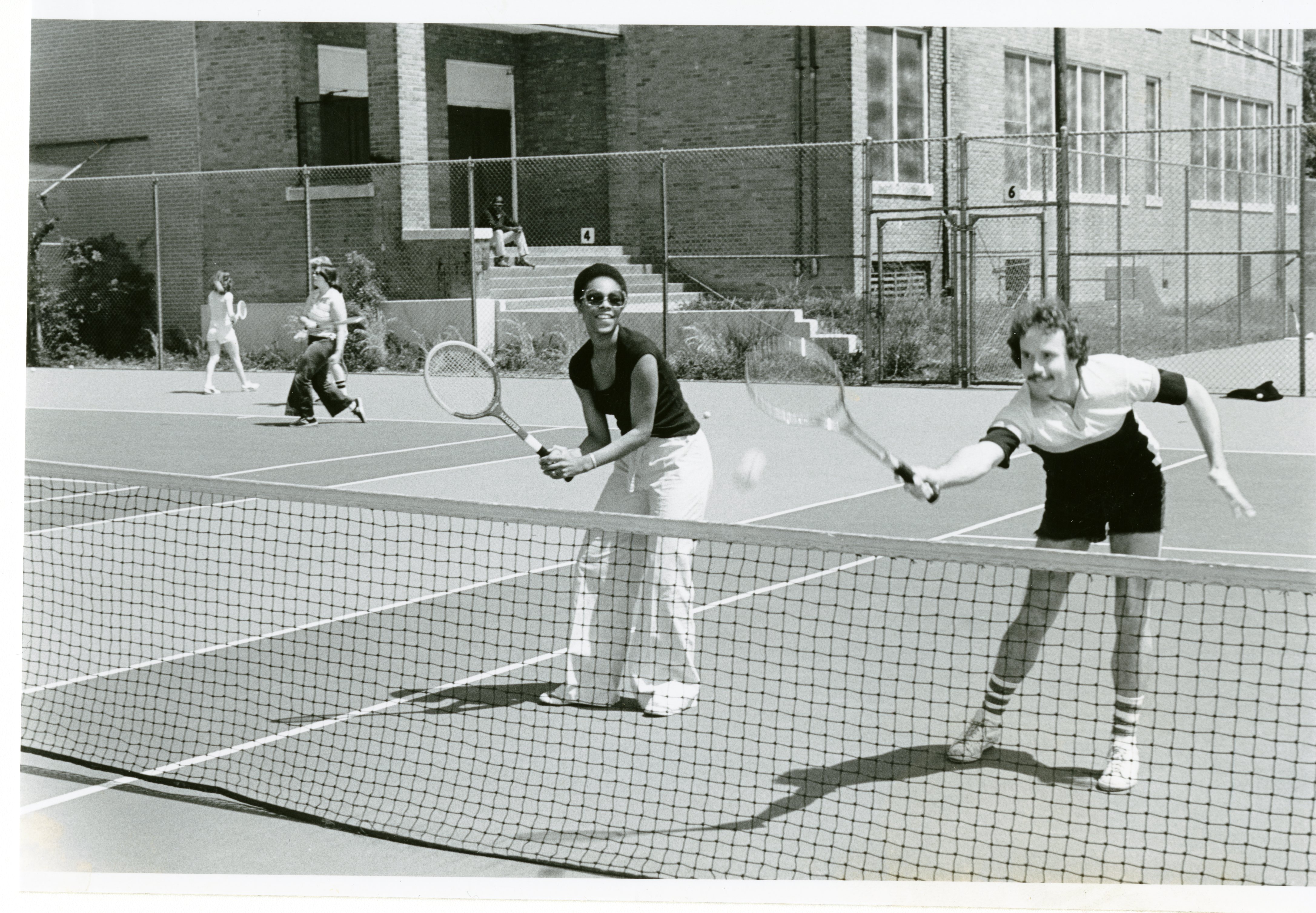 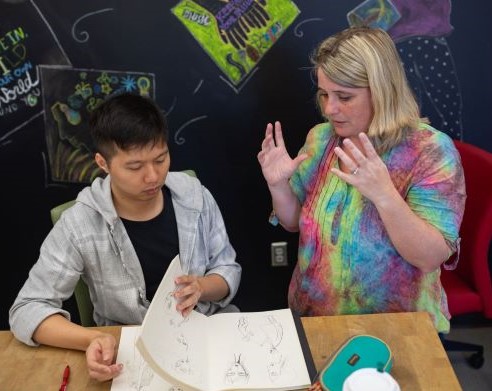 Advertising and Graphic Design Instructor Heather Geiser is photographed speaking with a student about a project at the Harper Campus. Central Piedmont's in-depth, two-year professional preparation advertising and graphic design program will prepare students to go directly into the job market with an Associate in Applied Science degree. Our curriculum is designed to provide students with the knowledge and skills to be one of the next creative leaders in the advertising and graphic design community. 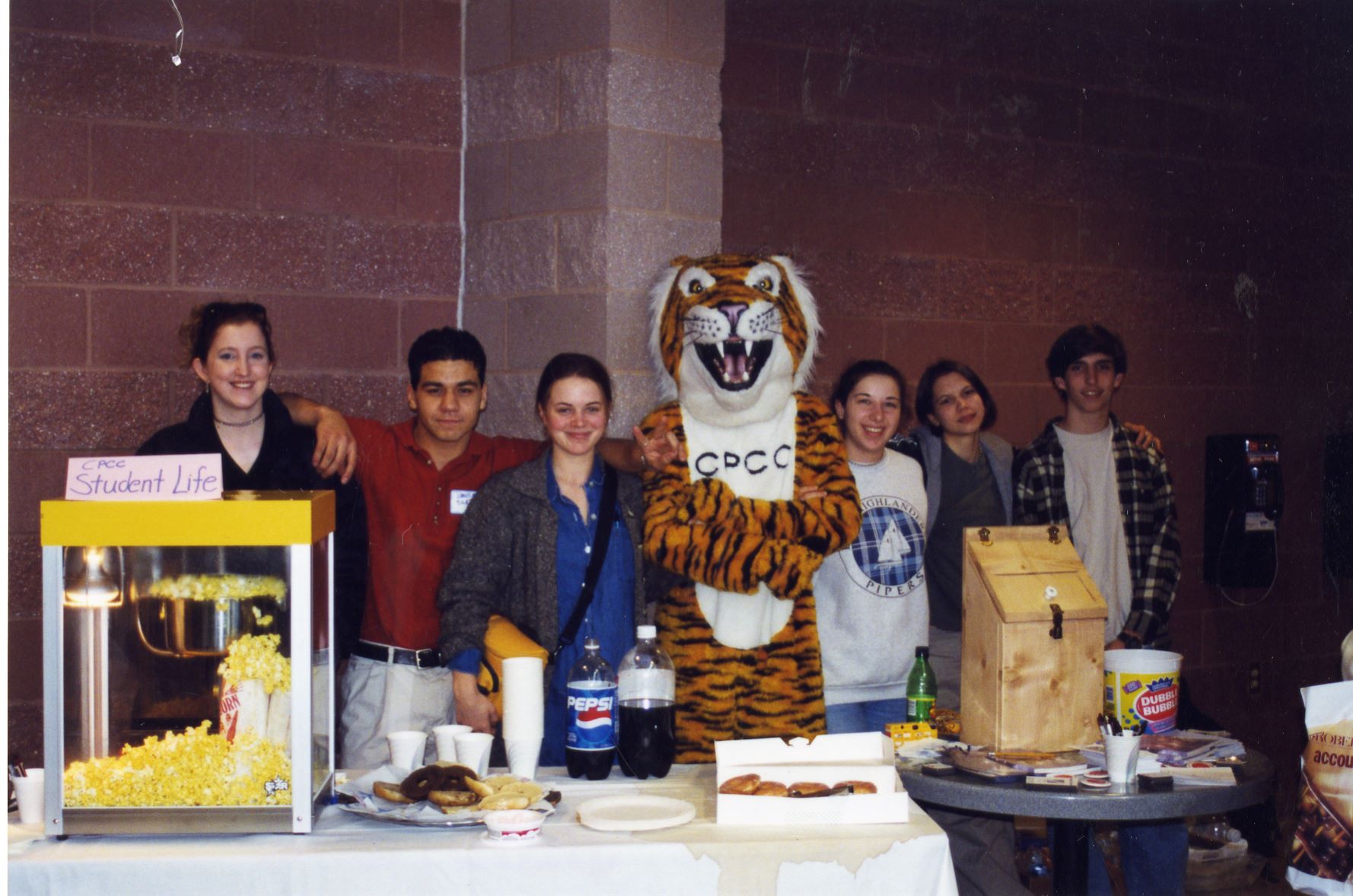 Members of Student Life at Levine Campus making sure students do not go hungry at the 1990 Career Services Opportunity Fair. Career Services is committed to helping students and graduates successfully navigate the transition from college to career. Central Piedmont has over 70 student clubs and organizations to choose from, as well as honor societies, fitness and recreation, service learning, and leadership opportunities. 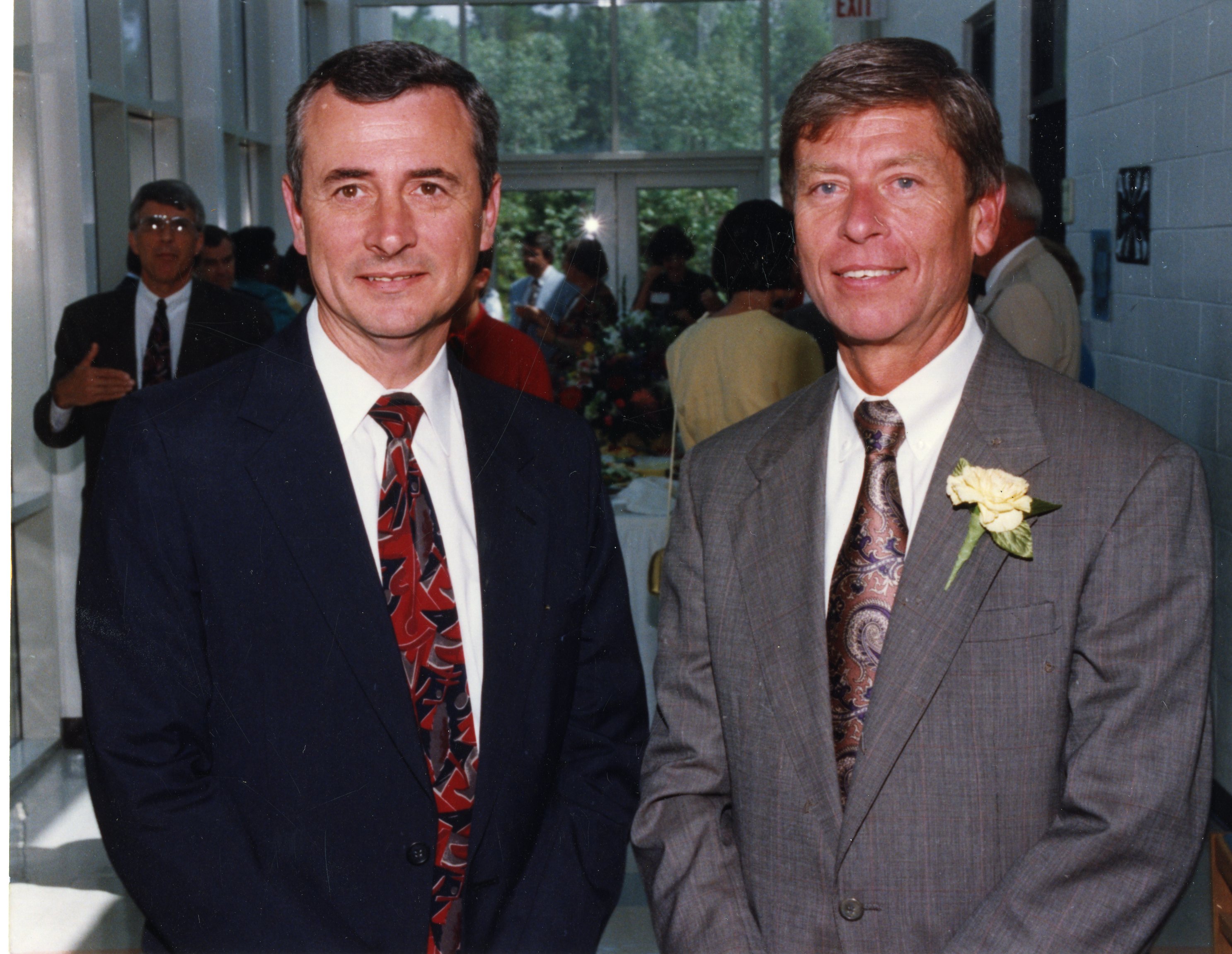 On the left is Dr. Tony Zeiss (third president of Central Piedmont) photographed with Charlotte attorney William M. Claytor, a past chairman of the college's Board of Trustees, at the opening dedication of the Claytor Building on Merancas Campus in 1994. 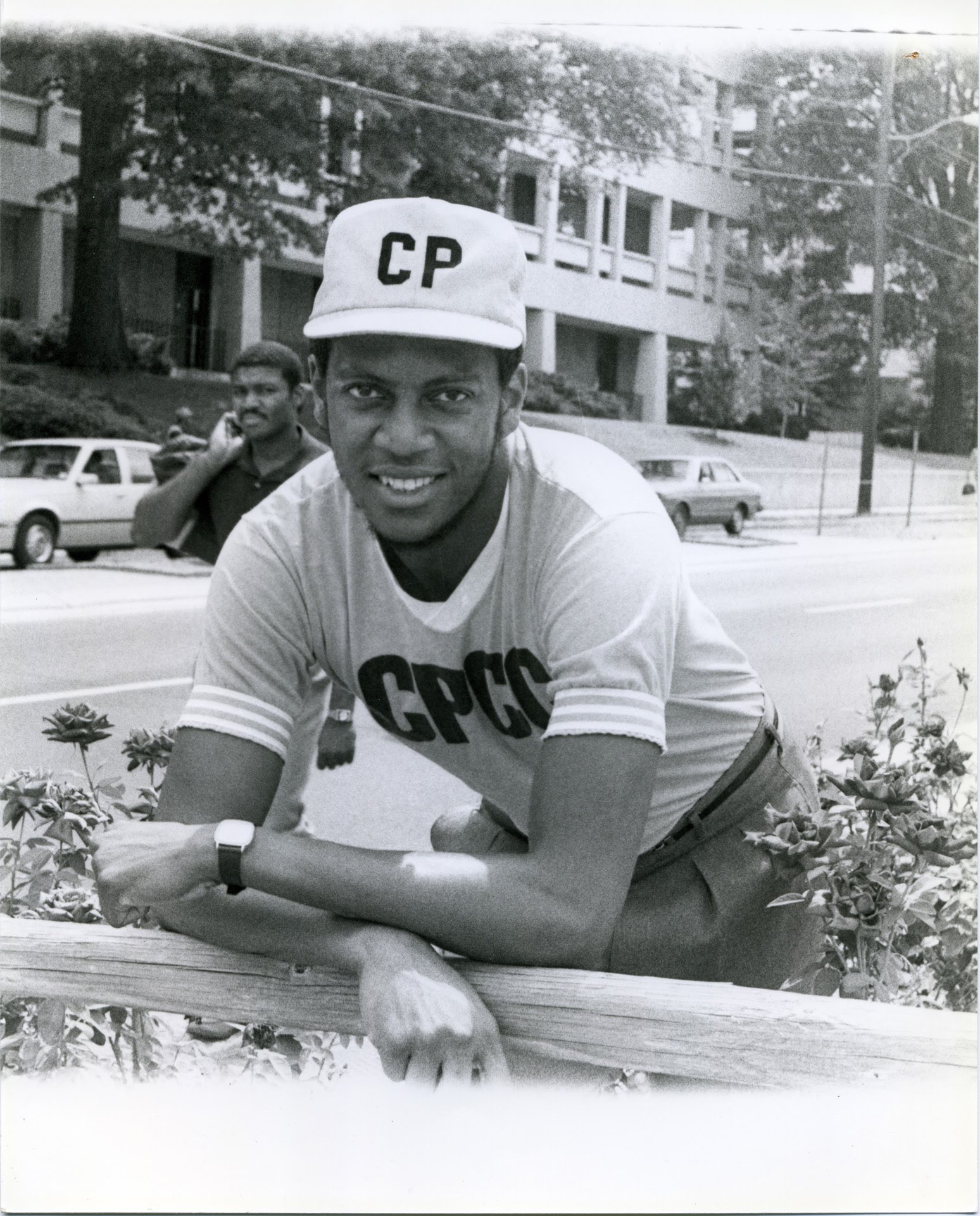 An unidentified student and member of our former Baseball team shows off the “new” team uniform in 1981. Central Piedmont organized an informal baseball club in 1979 with games being held between faculty members and students as a way to release stress during midterms and finals. By 1983, the baseball team had converted to the softball team and lasted until 1984-1985. Central Piedmont also had teams for basketball, football, cheerleading, and soccer until 1997. 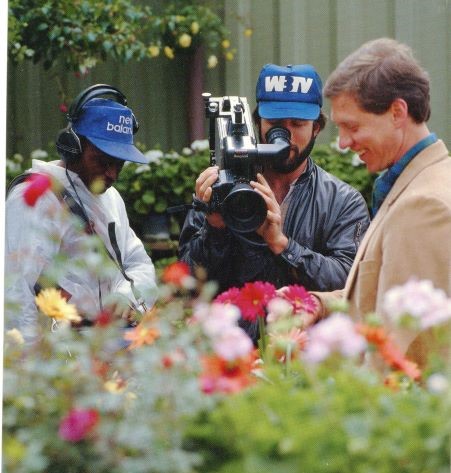 Central Piedmont Horticulture Instructor, Chip Hope (tan jacket), recording an instructional program  in 1989 with WBTV Top O’ The Day cameraman Tony McMehan and WBTV Creative Services staff, Cam Snouse. Before the days of the internet, Central Piedmont used tools such as television, telephone, newspapers, and the radio to provide access to instructional opportunities. The Horticulture program began in 1982 and is offered at the Cato Campus. 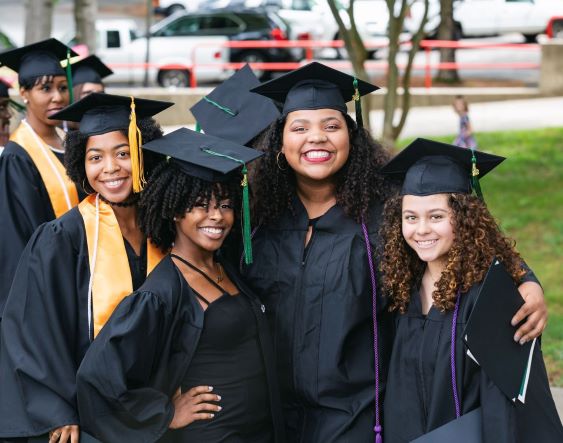 Students pose for a group photograph during the 2018 commencement ceremony. Graduation services are provided on all campuses, more information found at: https://www.cpcc.edu/academics/graduation. 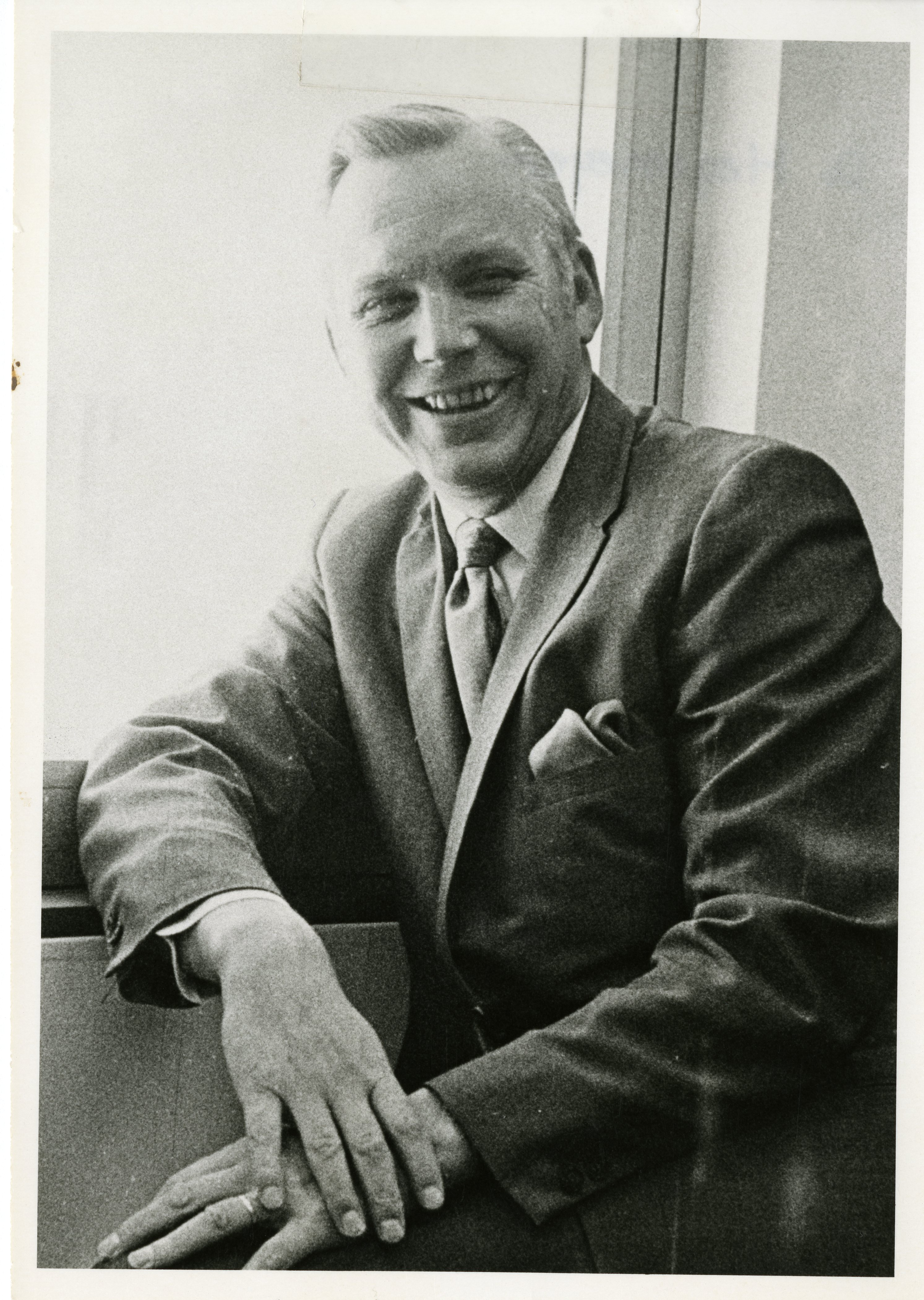 Dr. Richard Hagemeyer, founding president of Central Piedmont Community College, in 1975. He came to the Carolinas from the Midwest in the early 1960s to merge the CIEC and Mecklenburg College into Charlotte's first community college. Hagemeyer served as president of Central Piedmont Community College for 23 years and watched it grow into one of the nation's largest two-year schools. Hagemeyer, lauded as one of the key figures in the integration of education in the Carolinas, passed away in 2013 at the age of 95. 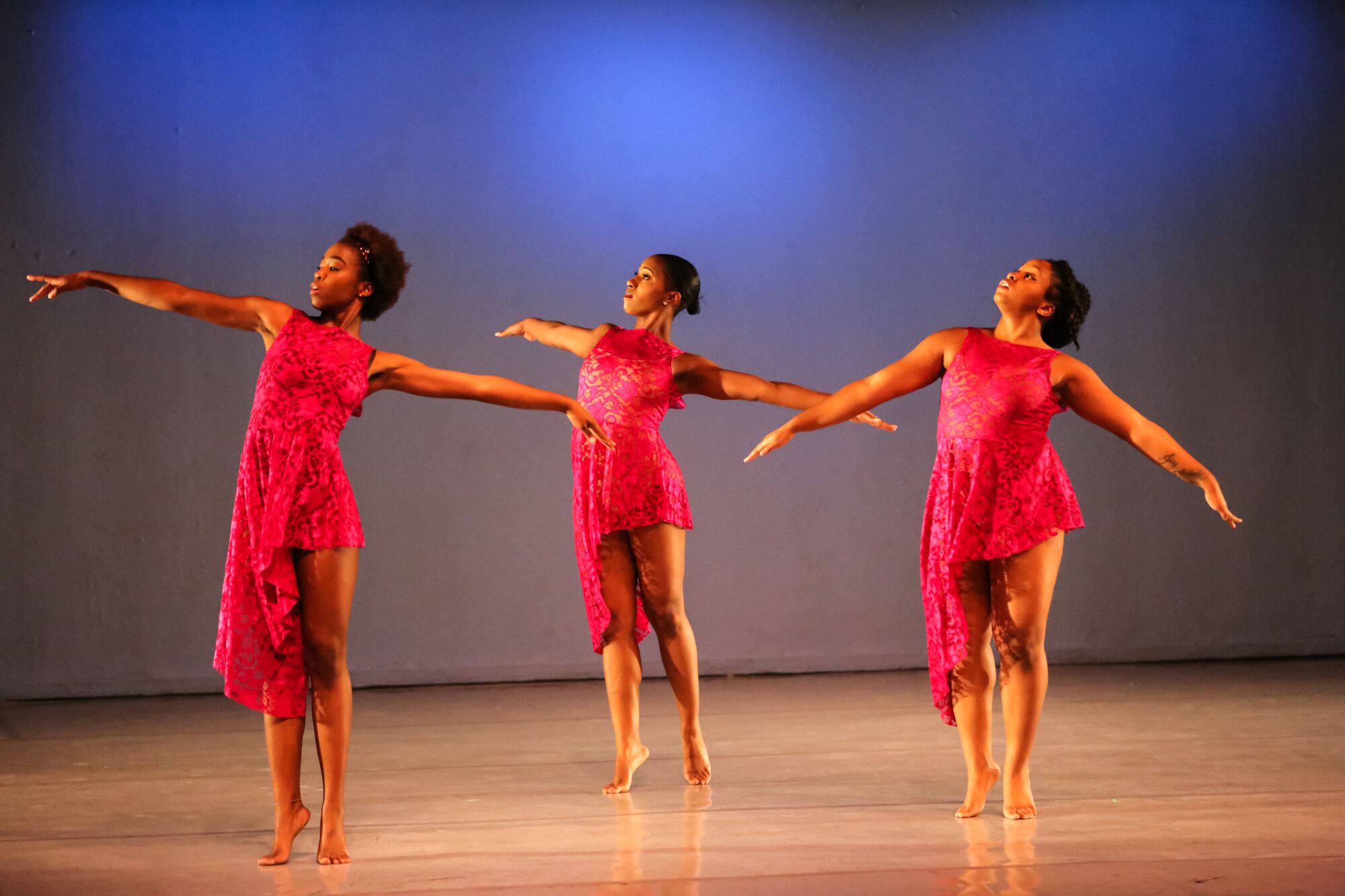 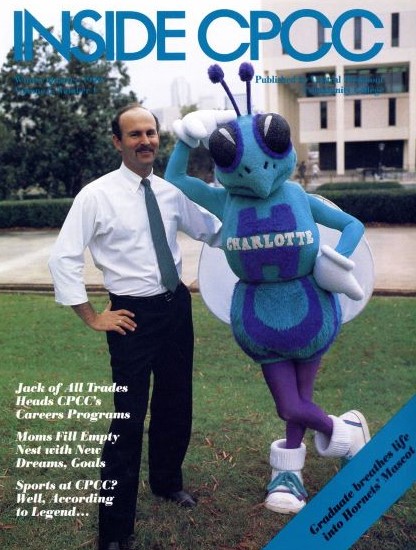 Central Piedmont alumnus, Jerrell Caskey, with Hugo the Hornet - a mascot he designed for the Charlotte Hornets basketball team! Jerrell Caskey graduated in 1974 from the commercial art and advertising design program. The image features the cover page of the 1989 Winter Quarter edition of the publication Inside CPCC. 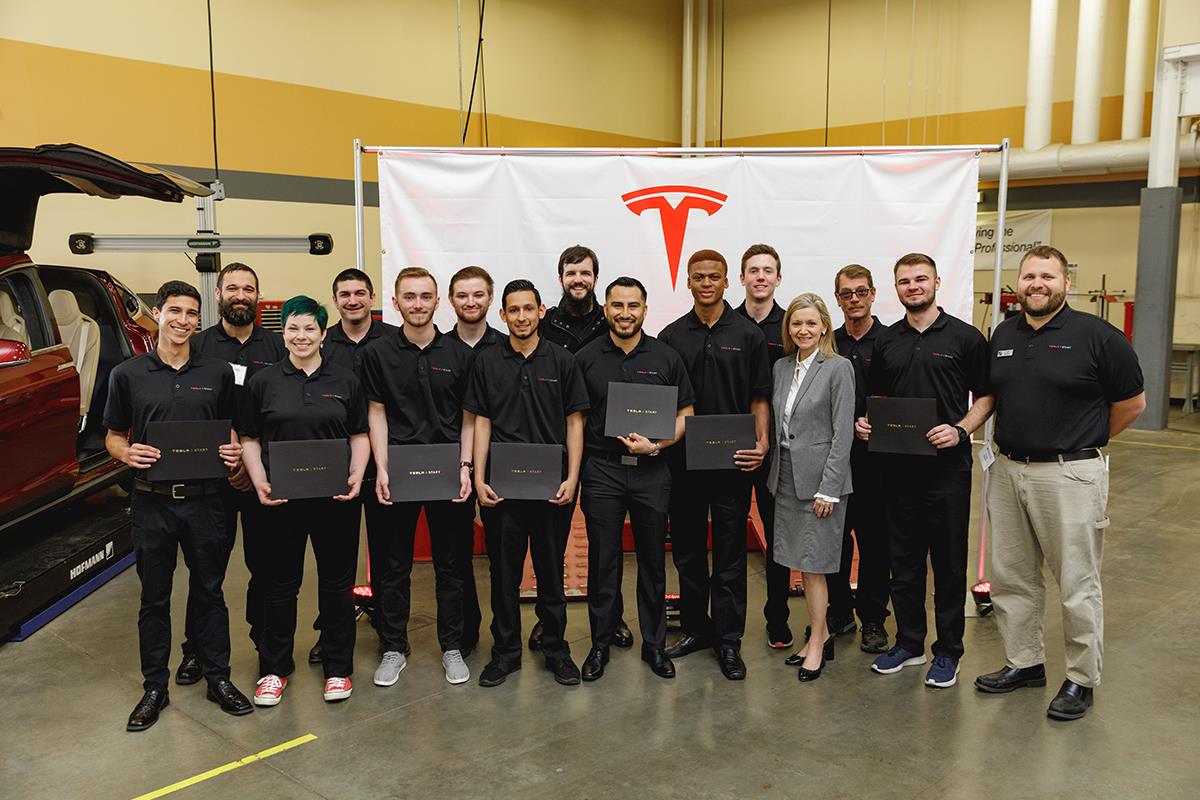 Central Piedmont president, Dr. Kandi Deitemeyer, with the first graduating class of the Tesla START program in 2018. Tesla START is a 12-week automotive technician training program designed to provide students with the skills necessary for job placement as service technicians at Tesla Service Centers across North America. The program is based at our Merancas Campus in Huntersville, N.C. Working together, Tesla and Central Piedmont have built a service bay for students to train in that is similar to what they will find at Tesla Service Centers.